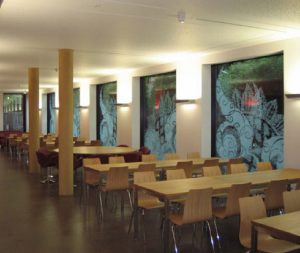 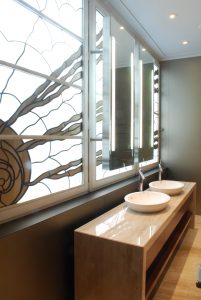 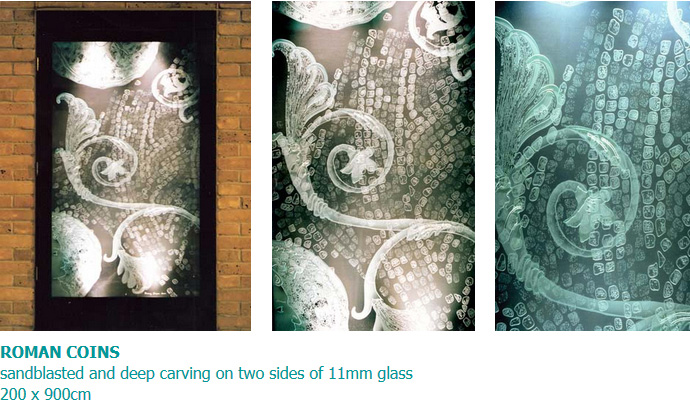 PROJECT: Windows for The Buttery

I was first shortlisted and then selected for this commission and asked to take inspiration from the iconic Pfeiffer Gates which were presented to the college in 1894 to commemorate Newnham’s first Principal; Anne Jemima Clough. Newnham wanted the window design to be abstract, graphic and bold.

Sunflowers were a favourite of Miss Clough, so I chose to feature them in the design. The other design elements I used pay tribute to the Queen Anne style brickwork in Basil Champneys’ elegant Arts & Crafts Movement architecture at Newnham College, and the curling acanthus leaves which march up the sides of the gates.

The design elements were sandblasted and carved on three sides of two pieces of glass, and then laminated together. These then formed into double-glazed units. By glazing alternate faces of the window, the blasted-brickwork curves create five arches which echo the Pfeiffer archway of the Pfeiffer Gates. The overlapping, multiple blasting creates magical shadow effects which provides an element of privacy for people inside and means they can peek out and view the elements.

“Redeveloping our kitchens, buttery and related spaces gave us our first introduction to ‘Public Art’. We had to find an expert in architectural glass to transform ten huge picture windows along the Sidgwick Avenue frontage into works of art. The windows face north – they need to let in as much light as possible and to provide some degree of privacy for people using the Buttery while at the same time packing a real visual punch both for passers-by on the street and for those within the College.
We found our expert! Beverly’s public art work for Tower Hamlets first drew our attention, and she was the artist we chose after a rigorous selection process. She absorbed the history and atmosphere of the College and translated our aspirations into a vibrant reality, giving dramatic impact both inside and out. It was a great pleasure working with Beverly – her combination of professionalism and fun was truly a delight!”
Frances Hazlehurst
Newnham College Cambridge

“Beverly was initially selected from a Crafts Council list as a suitable candidate to enter a limited competition for the design of the new Student Buttery windows at Newnham College Cambridge. Beverly went on to win the competition and worked with the College over a six-month period to hone her designs for the art glass windows which have now been installed at the College.
The windows form a public art contribution for the project. They face Sidgwick Avenue, the main approach road to the College and are highly visible to both the occupants and the general public. They define the interior space, providing drama at night when seen from outside, as well as privacy for the occupants of the dining room.
The College selected Beverly as she understood their aspirations for the glass design and she showed the selection panel how their aspiration might be converted into a piece of art. Her enthusiasm for her work is infectious. Beverly produced full-size drawings of the large windows and samples of the glass cutting and etching techniques to communicate the design ideas. She was flexible in her approach and was willing to discuss variations to her initial concepts which were developed into the final piece.
It was a great pleasure working with Beverly on this project.”
David Emond
R H Partnership Architects
94 Chesterton Road
Cambridge CB4 1ER
www.rhpartnership.co.uk

HACKNEY FREE AND PAROCHIAL CHURCH OF ENGLAND SCHOOL, LONDON. Blessed by the Bishop of London

The school were transforming an old 12’ x 6’ room in to a contemplation room. The existing windows in the room were unsightly and I was asked to design and make windows to complement the room and its purpose.

When I first saw the room it had been decorated, and there were beautiful artworks and furniture in place. There was a Tree of Life in carved and stained wood, a painted triptych, and a contemporary wooden ‘altar’, side tables and benches.

The benches had a quote from one of Julian of Norwich’s visions carved into their backs:

“In this vision he showed me a little thing the size of a hazelnut. I wondered how it could last for it was so small. I thought it might suddenly have disappeared.

And the answer in my mind was it lasts and will last for ever because God loves it.”

Using a selection of beautiful, hand-blown clear glass that plays with the light, I created a ribbon-like movement through three windows with semi- opaque, smoky glass, guiding the eye towards the Tree of Life. I also took the quote carved in the benches under the windows as inspiration to add one coloured element: I fused a small oval nugget of golden glass and bonded it onto the surface of one piece of ‘ribbon’. The precious nugget represents the little hazelnut, and the golden gift of God’s love.

“Hackney Free and Parochial Church of England School has created a faith space within the school – to be known as the Jerusalem Space – for use by students, staff, parents and the local church. The project brings together work by four artists, successfully creating a space that is both harmonious and inspiring.

For the art work to be shown to its full potential, the lighting of the space was given a great deal of thought and planning. Beverly Bryon of Prisms Glass, located in the north west London artists’ studio community, Kingsgate Workshops, was commissioned to design three square windows for the space.

Beverly visited the school on a number of occasions and was in regular contact to share ideas, and to ensure that her design work was in keeping with the spirit of the space. In this she was successful. She was careful to consider all the factors affecting the space and produced a design that is both consistent and echoes themes already present in the space.

She has created windows with a ‘light touch’ in the sense that they lead the worshipper, or any individual enjoying a moment of free time, to remain focused on the objects within the room rather than upon the windows. The windows, while simply beautiful in themselves, are not viewed as separate entities but rather as a single, harmonious, triptych of light.

Through her adroit design the windows are transformed into a trinity of luminescence, interlinked by a flowing milky ribbon of light to lend a wonderful
dynamic of movement. The windows draw one’s eye into the room, allowing the beauty of natural light to play on the panes and then upon the forms within the space to add still further to the grace of the room. The windows complete the space and contribute significantly to sustaining the aura of peace and stillness which has been created here.”

PROJECT: Roman Coins – modern art in an external wall of a new building

Prospect Tower was to be built on the site of a Roman cemetery, so a Roman theme was most appropriate for the art work. There are three main elements of the design, all of which are circular – enticing the eye and reflecting the design of the Tower:

• Roman coins – the building is near the old Royal Mint site, and in the financial heart of the city of London
• The acanthus leaf, oft-used in Roman art and still popular today
• Mosaic – very common over the Roman Empire; I used part of an ageing mosaic floor

By combining both deep and shallow carving, with shading and textural effects on both sides of the 11mm glass, a dramatic effect was achieved with mercurial shadowing and 3D illusion. The artwork is lit to dramatic effect and so can be enjoyed by passers-by, night and day.

PROJECT: The Spirit of St. Louis

Talks started around the middle of 2010 for ‘The Spirit of St. Louis commission and was finally installed in January 2012.

The client was an American who was living in Moscow. London based interior design company, Wheelerkanik, was working on a corporate apartment for the client, situated in an old Art Deco building.

The 3 windows were to be located in the bathroom/shower room of the apartment, each measuring 1.889m x 1.124m. The design was to have a classic Art Deco feel inspired in part by an old image of a skylight that had previously been in Claridges, London. The client also had an interest in Old Russian Bi-planes which the Interior Designer wished to make a reference to in my design for the windows.

I used a bit of artistic license deciding to link the client’s heritage with the Deco era, and chose to use an image of The Spirit of St. Louis for the planes.

Upon finalizing the design, there was the prolonged process of ordering specialist glass from St. Juste in France for the clouds and Lamberts in Germany. Also a special order was made for Moon Gold, double thickness gold leaf from Italy.

There was a bit of testing and tweaking with various techniques for the planes.
Deep carved sandblasting onto the ‘flashed’ handmade glass.

Finally, work could start on actually ‘making’ the windows,
including using the gold leaf.

Finally finished and safely in Moscow, a great team installed the windows in one day.


The client was delighted.